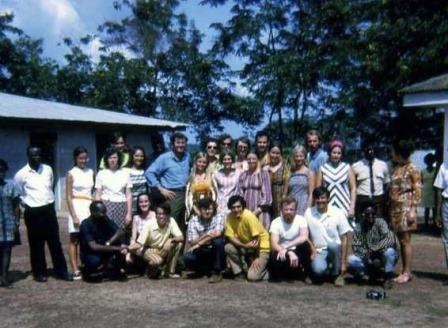 On the way to be published.
Although I have worked in several different jobs, including as a cook in my own restaurant, I always wrote. In grammar school I wrote several comic book versions of superman and batman. In school I always enjoyed writing term papers. In college I begged professors to let me write a lengthy paper instead of sitting for a multiple choice final exam. Many professors agreed. My ultimate conquest was convincing an anthropology professor and an art professor to let me write a 20 page paper covering a related topic (bone carvings of the Inuit Eskimos)  for both classes in lieu of taking each class final. I think I earned two "A"s for my effort although I would have to check my transcripts since it was so long ago.

While serving in the Peace Corps in the early 70's, (can you pick me out of the photo),I kept a journal, wrote short stories of my experiences, and composed poems, most of them poor but a few better. While serving in Liberia, West Africa, I wrote a children's tale of a boy who was blind and another boy who had leprosy and their unlikely though necessary friendship. The story was bought by the BBC and broadcast world wide over their network. What a thrill to hear one's words spoken over the air by such a distinguished media. I hope to make a book out of that short story.

I've been a runner, taught school, father, mentor, entrepreneur, grandfather, husband and a writer. Could there be anything better?

I've written business articles. I wrote several columns for a local magazine that covered business development in my adopted home town of Winston-Salem, North Carolina, where I was Director of Development for the City for many years. I also teach with the community college system, mentor small business owners and write business plans for aspiring entrepreneurs.

Since retiring from full time work I devote my spare time to writing fiction. Luckily for me Moonshine Cove Publishing agreed to publish my first book, "The Cottage on the Bay". The story takes place on a fictional stretch of North Carolina coast near Wilmington and follows the life of a one time plantation matriarch as she navigates the changing times after the Civil War and into the twentieth century.
Published in February 2018 copies are now available right here on my web site, at a few local book stores and at Amazon Books.

My New book - "Murder on Black Mountain" - a mystery set in the Blue Ridge Mountains, is scheduled to be published in September 2020, by Prairie Rose Publications. Check back for details. In the meantime you can read excerpts below. Contact me back and tell me what you think.
"Murder on Black Mountain - Excerpt"
"Cottage on the Bay Excerpt"